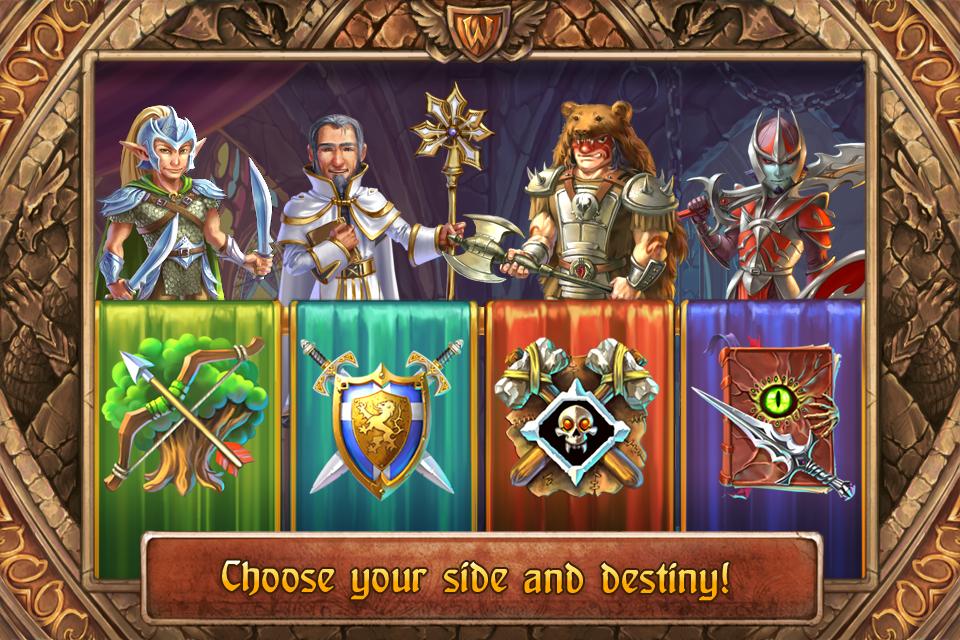 The first thing to know about the world of Warspear, is the available playable factions.

Each faction has an ally and two opposing factions.

Choose your side and fight with allies against enemy factions controlled by other players!

Currently, there are four playable factions that contain three specific classes that are specific for each faction.

Each faction has one ally and two enemy factions, all controlled by players. When facing an ememy player/faction, you will see their names as a shade of red indicating hostility. Though you will not meet these enemy factions until you complete the beginners island of your chosen faction and arrive at the central isle called Irselnort.

There are also NPC's that are specifically aligned with certain factions as well (town guards are the prime example of this).

The god, Harad, created people so that they, together with the Firstborn, could protect the world from darkness. Harad's children, who are freedom-loving and restive by nature, have gained the right to soon go their own way.

As they made great sacrifices to the alter of victory during the war against the legion, Harad called them the chosen. Having created an almighty empire, they diligently shadow the power of Darkness, which grows in Arinar once again.

Details: Increases the maximum amount of energy by 10%

The elves, or Firstborn, were created by the god, Nuadu. From the time immemorial, they have protected the world from Darkness, eradicating its creatures all over Arinar and healing the wounds caused by it.

For a long time after the War of the Spear, the elves never left their forests, avoiding contact with other peoples. However when a new menace, the Legion, appeared to threaten the world, the Firstborn began preparing to protect the world's balance once more.

Details: Increases the character's damage by 4%

Many centuries ago, the highlander's ancestors cursed their congeners, who betrayed them, and left the lands of their forefathers, led by their chieftain, Berengar.

These people of the Clans, who settled in faraway and inaccessible mountains, had to temper both their bodies and spirits in an endless struggle to survive. The highlander's memory faded with the years, but their fierce hatred towards the people of the forests and plains never died.

The Forsaken, created by the black breath of the dragon, Garahan, had almost destroyed both people and elves during the age of the War of the Spear.

Having suffered a shattering defeat during the last struggle with the sentinels, the rest of the Forsaken Legion fled to the south of Arinar. Until recently, they have been hatching plans for the reappearance of their power, but to carry out these plans, the Forsaken will have to face the Sentinels in a deadly fight.

The Chainless League originated in the eastern part of Arinar, soon after the war of the spear. Enterprising merchants quickly established trade routes through the isolated parts of the crippled world. Maintaining a neutral position, the chainless league increased its wealth over the centuries. They say that its power is incredibly great. Nobody knows what the merchants of the league actually mask under their polite smiles.

The Chainless league is the first neutral NPC faction that was introduced into the game.

This faction may become hostile if provoked. They can however, become fully neutral if you complete quests that give reputation for this faction.

Reputation begins at -5000 as neutral, then become friendly at 0 reputation.

Maliat valley elves, who call themselves the Dark elves, are distant relatives of the Firstborn. They are the flesh of Ayvondil, an island that never managed to completely recover from injuries received during the War of the spear. Moon Priestesses, who reign over the Dark elves, do not let anyone interfere into affairs of their peoples. But the elves of Maliat welcome strangers, willing to help them in their fight for survival, with open arms.

This faction was first introduced into the game during the 4.00.0 Mysteries of Ayvondil update release.

This faction is naturally friendly, but you can complete quests that give reputation for this faction, that unlocks further quests and dungeon difficulties.

Reputation begins at 0 and can be increased right up to 5000 reputation.

Tlalocs from Tlaskoe
Lizardmen, also known as tlalocs, had their own country long before the first War for the Spear. However, after the Great Divide they were scattered throughout the Arinar. Here, on the banks of Ayvondil, lizardmen found new capital - Tlaskoe. Raised the pyramids in honor of their gods, tlalocs for a long time enjoyed peace welcoming strangers.

This faction was introduced into the game during the 4.02.0 update.

This faction is naturally friendly like Maliat Elves, and completing quests that give reputation unlocks further quests and dungeon difficulties.

Reputation begins at 0 and can be increased to 5000.

After the Great Divide, Shadders inhabited many corners of Arinar. Meadows and thickets of Arinar became an ideal home place for this active tribe of natural born hunters and fishers. Their main city Mara'kosh is hidden among green plants. Praising the Great Mother - the divine patroness of the tribe - the Shadders had not seen evil for years.

This faction was introduced into the game during the 5.1 update.

The faction is naturally friendly to the Sentinels but hostile towards the Legion. Only Sentinel players are able to do quests for the Shadders.

Sentinels can increase their reputation from friendly (0) to honored (5000). Getting enough reputation points grants access to harder difficulty levels of the Tree of Seasons dungeon.

Retrieved from "https://warspear-online.fandom.com/wiki/Factions?oldid=6500"
Community content is available under CC-BY-SA unless otherwise noted.